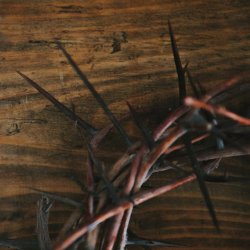 Who Then Can Be Saved?

Do you want to be “saved?” Some people have stated they do not want to live forever (saved from the wrath of God and eternal death) because they think it will get boring. Is it possible that some people want evil in the world to keep their lives from boredom? Is goodness boring?

Some have stated there was no need for Jesus to die to pay for their sins; God can just forgive by forgetting the justice he promised on evildoers. Others look in the mirror and say, “I'm not so bad; I haven't gone on a killing spree so I don't deserve to be punished.”

Clergy have admitted disbelief of the Scriptures as God-breathed, a source for absolute truth from God. Some who believe God exists have created their own mental “image” of God just as the Israelites got tired of waiting for Moses to come down off the mountain and began constructing a golden calf to worship. A relative of mine told me she got her beliefs about God from many different sources—not one of which was The Holy Bible.

The irony is God wants to save all these people from their misguided beliefs and life choices:

But do not forget this one thing, dear friends: With the Lord a day is like a thousand years, and a thousand years are like a day. The Lord is not slow in keeping his promise, as some understand slowness. He is patient with you, not wanting anyone to perish, but everyone to come to repentance.
2 Peter 3:8-9

Ezekiel wrote quoting God: “Do I take any pleasure in the death of the wicked?” declares the Sovereign Lord. “Rather, am I not pleased when they turn from their ways and live?” (Ezekiel 18:23).

God provided a way. Since we never did and never will become righteous by becoming the righteous people God intended when he made man in his image, he paid our penalty, satisfying both his justice and his compassionate mercy. Though salvation is a gift, there is a requirement: We must accept the Savior. He was nailed to a Roman cross at the insistence of representatives of all nations (not just the religious leaders of the Jews) who could not bear the truth he spoke. But God planned from the beginning he would pay our debt against him.

Every time we deny Jesus as being the Anointed One of God, our Lord and Savior, we too are represented as shouting, “Crucify him! Crucify him!”

Each one of us should ask, “Do I want to be saved? Can I acknowledge I need to be saved?”